How does it work?

On Super PC, which is used to count and has the appropriate graphics card, install SL3Client which communicates with the server every few seconds. Serwer is executing all the work with dividing and checking whether the code is counted. We manage the whole process through the site http://servmg.com/ :


The system can connect up to 1,000 computers. Work on the calculation of one code is divided into 100 or 200 or 500 or 1000 pieces. So small parts are sent to each PC, when one PC calculates its part tells the server about the result, if the code is not found, it retrieves the next part of the counting. If, however, the Pc found the code - the server immediately stops counting on the other PCs and sends them the next parts of another hash.

How do I start?


The biggest advantages of our application are:

What if the PC took the job to count, but is, for example, suspended?

The server periodically checks to see if the task (that was sent) is still counted. Jf the job has been sent to a PC and no response came, then this task will be sent to another free PC.

Can 2 PCs get the same task?

Each task (part of the hash) is sent to only one PC. An exception is when the job was sent but there is no communication with Pc for a long time, then the task is sent to another PC.

When we have strong PC (~ 8000MH) we select 100, we will lose less time when sending new tasks. The times are about 1.5 seconds to reload task. The advantage of sharing a larger amount of parts is that the progress on the site is frequently updated.

When the progress on the site is updated?

Progress is updated only when the PC calculates the whole job he got, then sends info that there is or there isn't a code in this peace. It may happen that for some time the progress is stoped and then suddenly jump significantly. It can happen when several PCs ended the task and sent info to the server.

In what format the result is given?

When the counting is completed, there is a .COD file for download on the site. This file can be conwerted to NCK in a few seconds using any box (MX-Key/Cyclone/ATF/FenixKey).

Do I need internet connection on Super Pc?

Yes, stable internet connection is necessary. It can be slow but stable.

Can I have one cloud of Super PC from different locations?

Yes. It does not matter where the PC is connected to the cloud! They may even be on different continents, it's important just to have access to the Internet.

How to move logs in the queue?

Just click on the ID of the hash, hold down and drag anywhere in the queue. 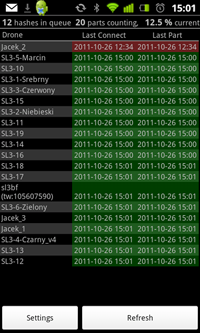 PRICE:
At the moment, addition is FREE for all users of MSM.

Some one can ask, why now ? We have written so we give it

FIRST IN THE WORLD cloud system working with oclHashcat-lite v0.07

Our system in 100% can use features new version !

The most important news about SL3 cracking: 
3. Register drone by visiting *Drone add URL*. You can check HW Key by runing in terminal::

After registering save key into drone config by runing in terminal::

(put key generated on register page in place of ``KEY``)

Your drone is ready to go, you can run it in terminal::

If you wan't to report bug please run drone in debug mode::

When reporting errors please atach debug.log and message.log to bug report (zip it or cut file to only last 100 lines or so).

If you're able to run hashcat on linux machine, hcloud-drone should work.

At this moment hcloud-drone doesn't report speed to server. It will be added within few days from this release.

hcloud-drone must have ifconfig and udevadm installed, as well as physical drive (sda1 or hda1) to guarantee HW Key uniqueness if you're runing diskless cluster, please contact us so we could work it out.
MARTECH TEAM
shop@martech.pl
TechMobil@martech.pl
GG 3364708
698 999 111

Now you can decide which method of counting is better for you, individually for each HASH.
MARTECH TEAM
shop@martech.pl
TechMobil@martech.pl
GG 3364708
698 999 111

Checking the waiting time for calculation of a specific http://imei.info
Now the client can check the expected time of his code calculation.
http://servmg.com/en/hcloud/mycode/
The time is approximate and statistically calculated based on the time of recently completed hashes and % of the current.


Changed the field where you enter the email address (email to which the calculation result should be sent)
How does it look In practice?

You create an account for your customer with the specified limit of logs which he can add
http://servmg.com/en/users/
Customer has access to a simplified version of MSM where he can
add/remove http://imei.info
The hash will be calculated when it turn comes [*]The customer sees how many credit he have left

[/list]
[b][size=3]As a result, MSM becomes a maintenance-free for the owner

Installer version, included OCL 0.09, you can also download 0.08 version
Auto update Client, this is the last time you have to update the client manually
Auto update OCL version on all PC’s
Card drivers auto update will be ready soon

We suggest installing Client in c:\SL3Client\. Please don’t install in folders protected by Windows like "Program Files" (auto update may not work properly).


How to update (last time manual):

http://servmg.com/download/installer/SL ... taller.exe
Start install pack and select OCL ver which you want to use (0.09 requires Drivers [URL="http://sites.amd.com/us/game/downloads/Pages/radeon_win7-32.aspx"]12.1 32bit http://sites.amd.com/us/game/downloads/ ... n7-64.aspx"
Start Client and accept hashcat EULA - just enter YES
Pastle Autorization KEY from drones tab (to copy to clipboard KEY click on KEY Icon)
That is all
Next time, to update the client, just click in drones tab “new version” and the client or OCL will update automatically

Of course the client will wait with auto update until the job is finished, so you won’t loos the calculation time

iPhone app to monitoring system and PC's and show how much logs is in queue, curent progres and time to finish last log. 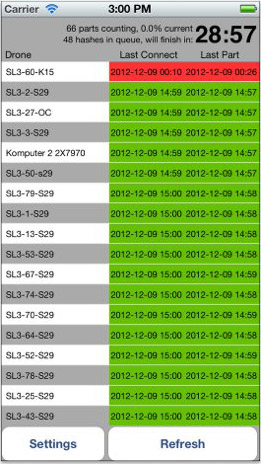 To make it easy we add option in drones edit tab:

If you check this option and click save (one time). Client on this pc after finish current job will download fixed EXE from server and replace it on pc.

IF you use 0.09 before all will work automatic. If you use older version before you must say YES in EULA window on this pc.

You can do this job for all your PC one time, just click:
Force Hashcat reinstall on all drones

Fully automatic system for selling your power. Just add a link to the msm in the classifieds (or make redirect to your own domain). Client will be able to see all about your offer, can buy credit himself and add hash to your cloud. All you have to do is look how much money do you have

Q: How to edit my site ?
A: After login go to: Tools >> Owner details
http://servmg.com/en/ownerdetails/

Q: How can i sell credits via Paypal?
A: In Owner details set "PayPal payee details". Your paypal id, price and Currency.

Q: How can my customer buy credits?
A: He have to go to your individual site and make account by clicking Register, after that click "Buy more credits" and pay via paypal. Credits will be added automatically after payment.

Users browsing this forum: No registered users and 7 guests